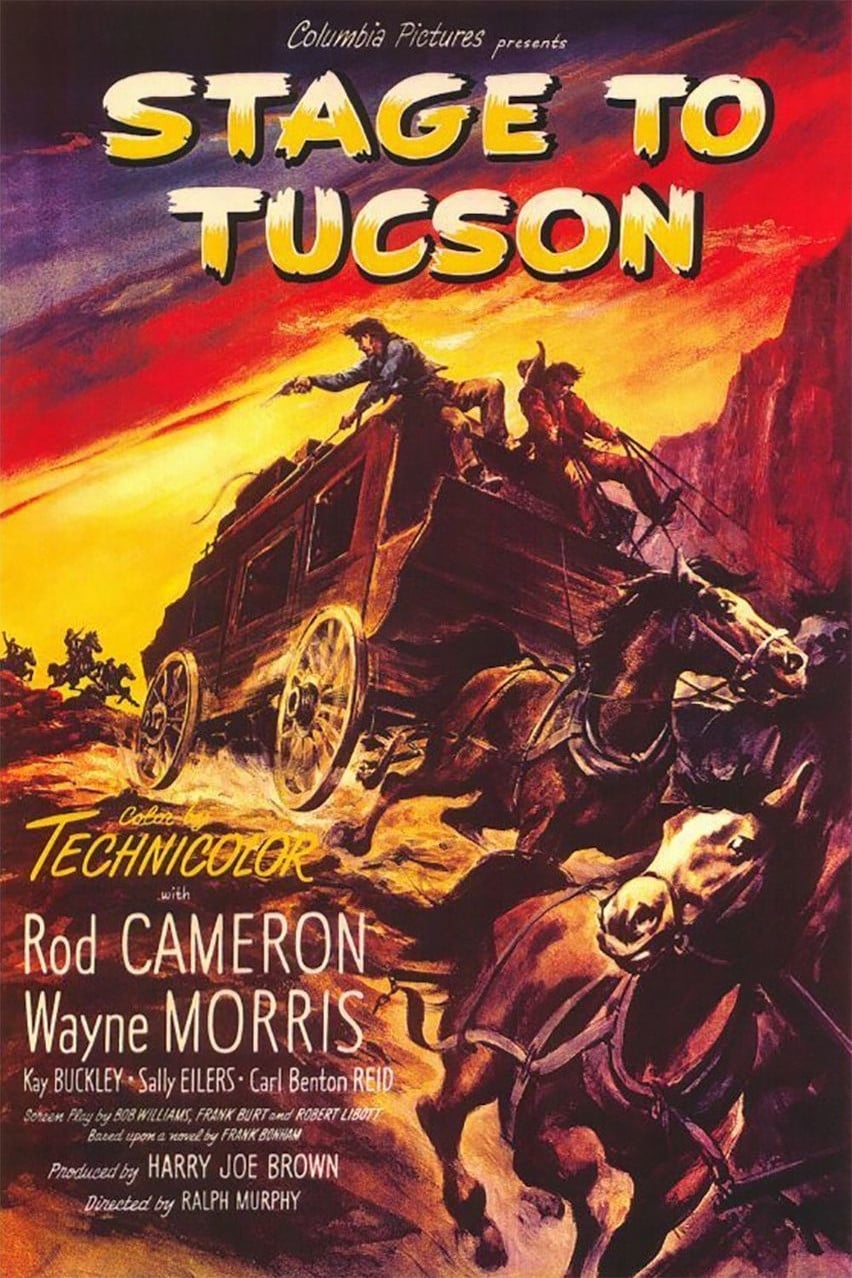 A group of outlaws posing as Southern sympathizers and led secretly by freight-line owner Jim Maroon are raiding stagecoaches, and this is a threat to the Union communications. Grif Holbrook, a trouble-shooter for the Butterfield Stage Line, and Union man Barney Broderick team up to try and put a stop to the activity, when they aren't fighting over the charms of Kate Crocker.

A peace-loving man named Ben Kane takes a job as deputy marshal of Lords, in the old West. Kane is no lawman, but he accepts the badge because he has an old score to settle with the town's chief trouble-maker. Once on the job, Kane must also deal with a young sharpshooter named Billy Young and a sharp and sassy saloon dancer, Lily.

Across The Rio Grande

Outlaws attempting to kidnap Steve Blaine from a stagecoach are ran off by the sharpshooting of his sister, Sally and rescuers Jimmy Wakely and Cannonball Taylor. Steve is investigating his father's sudden death after charges of theft from the Sloan/Carson mine. Sloan is killed after Wakely learns that ore is being smuggled across the Mexican border into the mine, and then sold at the higher U.S. prices

When a stagecoach guard tries to warn a town of an imminent raid by a band of outlaws, the people mistake him for one of the gang

Author Robert Louis Stevenson takes a trip to Napa Valley, California, in 1880 and gets involved in the exploits of a stagecoach driver who captures a hooded highwayman called The Monk. Supposedly inspired by a true incident, this offbeat Western based on Stevenson's The Silverado Squatters is a dandy, high-spirited adventure yarn.

Bandit Cheyenne Harry reforms because of the faith placed in him by Molly Young and her father. Soon, however, Harry is lured from the straight and narrow when he meets his old friend Ben Kent and consents to participate in Kent's plan of robbing a stagecoach.

After a stagecoach robbery goes bad, two brothers leading a gang of cowboys must survive the night in a ghost town inhabited by a coven of witches.

Bounty hunters seek shelter from a raging blizzard and get caught up in a plot of betrayal and deception.

A group of people traveling on a stagecoach find their journey complicated by the threat of Geronimo, and learn something about each other in the process.

The sheriff of a small town in southwest Texas must keep custody of a murderer whose brother, a powerful rancher, is trying to help him escape. After a friend is killed trying to muster support for him, he and his deputies - a disgraced drunk and a cantankerous old cripple - must find a way to hold out against the rancher's hired guns until the marshal arrives. In the meantime, matters are complicated by the presence of a young gunslinger - and a mysterious beauty who just came in on the last stagecoach.

The Man Who Shot Liberty Valance

A senator, who became famous for killing a notorious outlaw, returns for the funeral of an old friend and tells the truth about his deed.

The Ballad of Buster Scruggs

Vignettes weaving together the stories of six individuals in the old West at the end of the Civil War. Following the tales of a sharp-shooting songster, a wannabe bank robber, two weary traveling performers, a lone gold prospector, a woman traveling the West to an uncertain future, and a motley crew of strangers undertaking a carriage ride.

Dave Evans, a small time farmer, is hired to escort Ben Wade, a dangerous outlaw, to Yuma. As Evans and Wade wait for the 3:10 train to Yuma, Wade's gang is racing to free him.

Having lost his horse in a bet, Pat Brennan hitches a ride with a stagecoach carrying newlyweds, Willard and Doretta Mims. At the next station the coach and its passengers fall into the hands of a trio of outlaws headed by a man named Usher. When Usher learns that Doretta is the daughter of a rich copper-mine owner, he decides to hold her for ransom. Tension builds over the next 24 hours as Usher awaits a response to his demands and as a romantic attachment grows between Brennan and Doretta.

John Russell, disdained by his "respectable" fellow stagecoach passengers because he was raised by Indians, becomes their only hope for survival when they are set upon by outlaws.

The Ballad of Cable Hogue

Double-crossed and left without water in the desert, Cable Hogue is saved when he finds a spring. It is in just the right spot for a much needed rest stop on the local stagecoach line, and Hogue uses this to his advantage. He builds a house and makes money off the stagecoach passengers. Hildy, a prostitute from the nearest town, moves in with him. Hogue has everything going his way until the advent of the automobile ends the era of the stagecoach.

A band of murderous cowboys have imposed a reign of terror on the town of Warlock. When the sheriff humiliatingly run out of town the residents hire the services of Clay Blaisedell as facto town marshal. He arrives along with his friend Tom Morgan and sets about restoring law and order on his own terms whilst also overseeing the establishment of a gambling house and saloon.

Stodge City is in the grip of the Rumpo Kid and his gang. Mistaken identity again takes a hand as a 'sanitary engineer' named Marshal P. Knutt is mistaken for a law marshal. Being the conscientious sort, Marshal tries to help the town get rid of Rumpo, and a showdown is inevitable. Marshal has two aids—revenge-seeking Annie Oakley and his sanitary expertise.

Union officer Kerry Bradford escapes from a Confederate prison and races to intercept $5 million in gold destined for Confederate coffers. A Confederate sympathizer and a Mexican bandit, each with their own stake in the loot, stand in his way.

Lee Van Cleef stars as Talby, a sadistic gunfighter who rides into town and takes on a young outcast as his apprentice.

The Shakiest Gun in the West

Jesse W. Haywood (Don Knotts) graduates from dental school in Philadelphia in 1870 and goes west to become a frontier dentist. Penelope "Bad Penny" Cushing (Barbara Rhoades) is offered a pardon if she will track down a ring of gun smugglers. She tricks Haywood into a sham marriage as a disguise. Haywood inadvertently becomes the legendary "Doc the Haywood" after he guns down "Arnold the Kid".