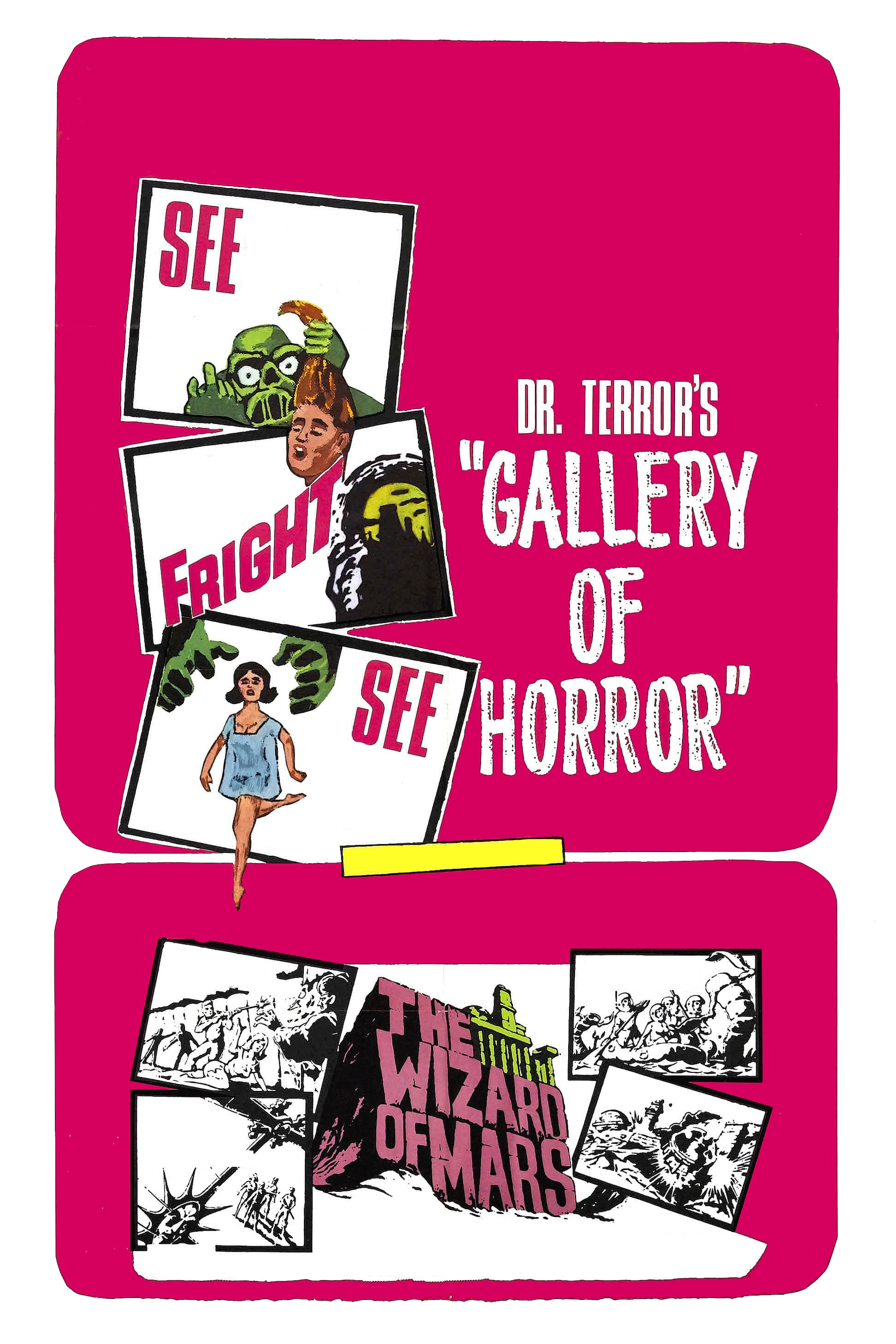 John Carradine narrates five horror tales, each with a comically predictable surprise ending. In the first, "The Witches Clock," the Farrells have purchased an old mansion in Salem Massachusetts and are warned by the town doctor of the history of witches in the community. The second story, "King of the Vampires," deals with a slight-figured killer called the King of the Vampires by Scotland Yard. The third, "Monster Raid," is about a man turned zombie when he ODs on his experimental drug. "Spark of Life" deals with a doctor Mendell obsessed with the experiments of a thrown-out professor named Erich von Frankenstein. "Count Alucard" is a variation on the Dracula story, with the Count acquirin ...

Famed monster slayer Gabriel Van Helsing is dispatched to Transylvania to assist the last of the Valerious bloodline in defeating Count Dracula. Anna Valerious reveals that Dracula has formed an unholy alliance with Dr. Frankenstein's monster and is hell-bent on exacting a centuries-old curse on her family.

Vlad Tepes is a great hero, but when he learns the Sultan is preparing for battle and needs to form an army of 1,000 boys, he vows to find a way to protect his family. Vlad turns to dark forces in order to get the power to destroy his enemies and agrees to go from hero to monster as he's turned into the mythological vampire, Dracula.

In the millenium version of this classic Gothic horror we find Abraham Van Helsing, who has tangled with Count Dracula in the past, working as an English antiques dealer. Simon is a vampire hunter in training under his apprenticeship.

Tales from the Darkside: The Movie

The first segment features an animated mummy stalking selected student victims; the second tale tells the story of a "cat from hell" who cannot be killed and leaves a trail of victims behind it; the third story is about a man who witnesses a bizarre killing and promises never to tell what he saw and the "in-between" bit is the story of a woman preparing to cook her newspaper boy for supper.

After Jonathan Harker attacks Dracula at his castle (apparently somewhere in Germany), the vampire travels to a nearby city, where he preys on the family of Harker's fiancée. The only one who may be able to protect them is Dr. van Helsing, Harker's friend and fellow-student of vampires, who is determined to destroy Dracula, whatever the cost.

For years, Blade has fought against the vampires in the cover of the night. But now, after falling into the crosshairs of the FBI, he is forced out into the daylight, where he is driven to join forces with a clan of human vampire hunters he never knew existed—The Nightstalkers. Together with Abigail and Hannibal, two deftly trained Nightstalkers, Blade follows a trail of blood to the ancient creature that is also hunting him—the original vampire, Dracula.

Jonathan Harker, a real estate agent, goes to Transylvania to visit the mysterious Count Dracula and formalize the purchase of a property in Wismar. Once Jonathan is caught under his evil spell, Dracula travels to Wismar where he meets the beautiful Lucy, Jonathan's wife, while a plague spreads through the town, now ruled by death.

Welcome to Hotel Transylvania, Dracula's lavish five-stake resort, where monsters and their families can live it up and no humans are allowed. One special weekend, Dracula has invited all his best friends to celebrate his beloved daughter Mavis's 118th birthday. For Dracula catering to all of these legendary monsters is no problem but the party really starts when one ordinary guy stumbles into the hotel and changes everything!

Dracula: Dead and Loving It

When a lawyer shows up at the vampire's doorstep, he falls prey to his charms and joins him in his search for fresh blood. Enter Professor Van Helsing, who may be the only one able to vanquish the Count.

Bella once again finds herself surrounded by danger as Seattle is ravaged by a string of mysterious killings and a malicious vampire continues her quest for revenge. In the midst of it all, she is forced to choose between her love for Edward and her friendship with Jacob, knowing that her decision has the potential to ignite the ageless struggle between vampire and werewolf. With her graduation quickly approaching, Bella is confronted with the most important decision of her life.

Vampires and werewolves have waged a nocturnal war against each other for centuries. But all bets are off when a female vampire warrior named Selene, who's famous for her strength and werewolf-hunting prowess, becomes smitten with a peace-loving male werewolf, Michael, who wants to end the war.

When the old-old-old-fashioned vampire Vlad arrives at the hotel for an impromptu family get-together, Hotel Transylvania is in for a collision of supernatural old-school and modern day cool.

Dracula, Mavis, Johnny and the rest of the Drac Pack take a vacation on a luxury Monster Cruise Ship, where Dracula falls in love with the ship’s captain, Ericka, who’s secretly a descendant of Abraham Van Helsing, the notorious monster slayer.

Interview with the Vampire

A vampire relates his epic life story of love, betrayal, loneliness, and dark hunger to an over-curious reporter.

Vampire death dealer Selene fends off brutal attacks from both the Lycan clan and the Vampire faction that betrayed her. With her only allies, David and his father Thomas, she must stop the eternal war between Lycans and Vampires, even if it means she has to make the ultimate sacrifice.

When Blade's mother was bitten by a vampire during pregnancy, she did not know that she gave her son a special gift while dying—all the good vampire attributes in combination with the best human skills. Blade and his mentor battle an evil vampire rebel who plans to take over the outdated vampire council, capture Blade and resurrect a voracious blood god.

Having escaped years of imprisonment, vampire warrioress Selene finds herself in a changed world where humans have discovered the existence of both Vampire and Lycan clans and are conducting an all-out war to eradicate both immortal species. Now Selene must battle the humans and a frightening new breed of super Lycans to ensure the death dealers' survival.

In the 18th century, a vampire escapes from the freak show she once participated in and teams up with a group of vampire slayers to kill the man who raped her mother. Storyline In the Eighteenth Century, Rayne is the half-human half-vampire Dhampir and the lead attraction in a carnival's freak-show in Romania. When she escapes, she meets a fortuneteller that tells that her mother was raped by the king of the vampires Kagan and she decides to destroy her father. In her journey for revenge, she meets Vladimir and Sebastian, the leaders of the fortress of vampire hunters Brimstone, and she joins their society. She seeks for powerful talismans to defeat Kagan, while the skilled warriors Vladimir and Sebastian train her to face the forces of Kagan and her human side falls in love with Sebastian. Written by Claudio Carvalho, Rio de Janeiro, Brazil

Four interwoven stories that occur on Halloween: an everyday high school principal has a secret life as a serial killer; a college virgin might have just met the one guy for her; a group of teenagers pull a mean prank, and a bitter old recluse receives an uninvited guest.

When Dracula leaves the captive Jonathan Harker and Transylvania for London in search of Mina Harker, the reincarnation of Dracula's long-dead wife Elisabeta, obsessed vampire hunter Dr. Van Helsing sets out to end the madness.